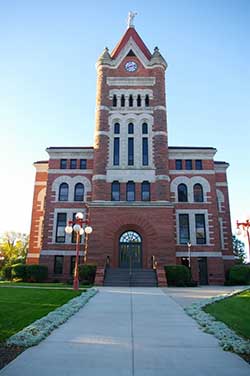 The verdict came in today in my 5th degree criminal mischief case in the Sioux County, Iowa District Court.  (Sioux County is heavily populated by Dutch Reformed Christians, who’ve let their once strong faith seriously backslide.)  I was found guilty.  I offered no defense of my actions as, per the 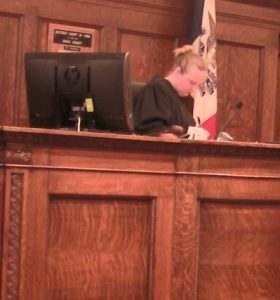 prior request of the Sioux County Attorney Tom Kunstle, the Cherokee County, IA Magistrate Lisa Mazurek (pictured above) previously denied my ability to present the very defense of my actions which I intended to argue.   As a result I also  waived my right for a Jury Trial because there was no way I would be acquitted by the narrow law being applied and the court-ordered limitations on my defense.  What I didn’t want was the enemies of God crowing, “He was found guilty by a Jury of his peers in the most conservative county in Iowa.”

After conviction, Kunstle  then recommended to the court that I pay the highest fine possible amount under the law: $650 plus court costs because my act was “so brazen”.  But Magistrate Mazurek assessed me the lowest amount of $65 plus court costs and surcharge, totaling $147.75.

Sioux County Magistrate Dan Pluim (pictured above), who had previously recused himself from the case without any real cause still showed up in the back row to watch the proceedings.

More troubling, last week I presented a Motion to the Court which she never responded to.  All other Motions and Requests were acted on very promptly.  But this Motion, entered prior to waiving my Jury Trial, was to amend the  Jury instructions which County Attorney Kunstle had proposed for her approval.  I asked to  amend it to include instructions as to where the authority comes from for the Magistrate (or any Judge) to require the Jury to only rule on the facts and that they must use only the law the Magistrate provides them to determine if the facts conform to this law, or not.  To further understand my request see this copy of the Exhibit that was attached to my request of the Court.

I filed several other motions after that.  Before I waived my Jury Trial Magistrate Mazurek ruled on the later Motions but never responded to my Motion to amend the Jury instructions.  Silence!  Why?  Could it be that there is no authority in law and that for  400 years the principle, under Common-law (which also brought us ‘due process, ‘right to face our accusers, ‘ ‘right to examine evidence’,  ‘open court rooms’ (no more Star Chambers), et al),  has been well established until the last few generations, that  the Jury always retained the power to ignore or nullify the Judge’s orders?

Note: Sitting for voir dire once years ago I was asked by the attorney for one party that ‘If I was selected to be on the Jury panel would I be willing to swear an oath that only the Judge would be allowed to rule on the law and limit my vote to the facts applied to the law the Judge provided us.’  I asked the attorney who would be administering such an oath. He replied that it would be senior district #3A Judge  Frank B. Nelson.  I then turned to the Judge on the bench and said, “Then he’d be violating His oath of office to ensure the defendant is to be tried by a jury of his peers with all due process protections under the Iowa Constitution (Article 1, Section 9) including the Jury’s authority to rule on both the law and the facts.” I advised those in the courtroom to seek out the Jury Trial of William Penn back in England (whom Pennsylvania is named after) and read the history of how the Jury in his case was willing to go to prison before yielding up their power to void the King’s law against preaching.  (The King had sent the jury to jail until they came back and honored his unjust law and render  a guilty verdict.   Judge Nelson never disputed it, never looked up and simply grunted, “Dorr, you can go.”

One more note: I once asked Federal Judge O’Brien in US District Court in Sioux City on a point of law.  The question was, ‘what could he do to punish jurors if they decided during jury deliberations to ignore his orders forbidding them from ruling on the law? And instead voted to nullify it in the particular case before them.’  Red faced he replied, “Nothing”.  I replied, “Funny you didn’t tell those jurors that before you sent them off to deliberate.”

Sanctions on the career await any attorney who dare advise members of a Jury that they can rule to nullify the law as well as on the facts.

So why is this all important?
If I had been allowed by Magistrate Mazurek to argue the nature and cause of my case by dragging in a library board member and have them read from these filthy children’s books and then advise them that they can rule on the law as well as the facts, the possibility of my being acquitted by an Orange City , Iowa Jury would have been greatly enhanced.   Per the request of the Sioux County Attorney Tom Kunstle the game was “rigged” to deny me an acquittal before I ever walked into that courtroom.

Meanwhile,  prior to my sentencing I then closed with a portion of the national anthem of the Netherlands titled Wilhelmus, below, regarding William of Nassau-Orange – of whom Orange City, IA was named in honor of.   (Many in the media asked about this statement after the case was over).

Statement to Magistrate Lisa Mazurek prior to sentencing.

I would like my closing statement to be the recitation of the final two stanzas of Wilhelmus, the national anthem of the Netherlands. It was written in the 16th Century as a gift to William of Nassau of the House of Orange aka William the Silent. And it was penned as if it was in first person, telling his story.  William of Nassau was the leader of the Dutch independence movement breaking from the rule of the King of Spain.

One hundred years later it was conceived essentially as the anthem of the House of Orange-Nassau and its supporters.

Finally, according to Wikipedia (which is not always reliable) the melody of this song is used, with rewritten English lyrics, as the alma mater of Northwestern College here in Orange City.  This city is named for the House of Orange.  And here in Sioux County, Nassau Township lies just south of Hwy 10 here in Orange City.

“…Pray God that He may ease you. His Gospel be your cure. Walk in the steps of Jesus. This life will not endure.  Unto the Lord His power I do confession make, That ne’er at any hour Ill of the King I spake.  But unto God, the greatest of majesties I owe obedience, first and last, For Justice wills it so.”

I closed stating, Your honor I burned those books because I, too, owe obedience  unto the living God that I serve and to provide justice to the children of Orange City.  Like William of Orange, it is His standard of justice I submitted to.  And now I place myself in your hands madam.