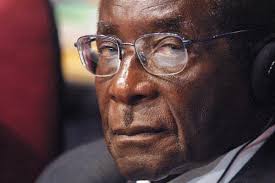 At the time of Robert Mugabe’s death this stand for Christ by a young pastor should now be remembered.

In February of 2002, Reformed pastor Rev. Dr. Derek Carlsen from Zimbabwe, in his mid-30s, married with three children (as memory serves), published open letters to Zimbabwean then-President Robert Mugabe and to the pastors of his country.  He did this at great risk to his life.  God blessed his obedience and spared his life while many other Christians were being persecuted, murdered and run out of Zimbabwe.  The letters can be found here: The President of Zimbabwe and here Letter to the President March 4th 2002 and here Open Letter to Pastors

Rev. Dr. Derek Carlsen and his family survived and now pastor a church in Illinois.

Put Rev. Carlsen’s stand in the context of this record of some of the atrocities of ROBERT G. MUGABE. And our political leaders hail him as the great statesman! (BTW the current president was his consigliari executing his orders!)

1982-1985 The Gukurahundi land seizes begin at least 30,000 Ndebele civilians were killed by the Zimbabwe National Army 80,000 could be the true figure

1983. Mugabe declares that “execution is the fate of anyone who forms a rival political party”

1983 Mugabe regime arrests a teacher , suspected of belonging to a political party. she is executed without trial in 1984

1983*: Mugabe regime arrests a lawyer , on suspicion of belonging to political party. He is executed in 1984.

1986 Mugabe regime murders hundreds of university students were protesting against tutorial fees in police custody. Although families are told they committed suicide by hanging, the regime denies them permission to view the autopsy report.

1986 Mugabe orders the execution of 220 military men after an attempted coup lead and expands this to include the interrogation and detention of thousands of civilians and human rights activists.

1987: Mugabe himself personally oversees the public hanging of a student for his participation in a peaceful Harare student demonstration.

1987*: Mugabe himself personally oversees the public hanging of a teacher , for her participation in a peaceful student demonstration

1988: Mugabe regime arrests hundreds of student for opposition group leaflets all are tortured to death in custody.

1988*: Mugabe regime murders 46 students who sang a banned hymn in a choir practice in custody.

1989*: Mugabe kills 179 teachers in the College of Engineering, in Harare . They are suspected of belonging to a rival political party.

1989*: Mugabe regime arrests over 300 students on suspicion that they belong to a rival political party. most are tortured to death in custody .

1989: Mugabe regime arrests vicar for reasons not clear he will die in custody by 1992.

1989: Mugabe regime detains a milkman for a protest over a fuel rise . He is held without trial or charges until his death from torture in 1994.

1990: Mugabe regime murders a former Minister to Ian Smith for a joke about Mugabe wife.

1996: Mugabe regime massacres 1270 political prisoners in less than 3 hours at Chikurubi Prison in Harare Government denies it took place for years. Many families still await word of their relatives.

1996: Forces order to fire on cricket fans in Harare because of praise of Australia team in world cup , 20-50 killed; many more injured.

1998: Mugabe regime cracks down on opposition to white farmers being forced to give up land hundreds of blacks die after army open fire on protests on Harare suburb’s

2000: Government steps up to get whites off land 78 white farmers killed and many more blacks who oppose it bulldozers come into tear down white farmers houses

2001: a 84 year old man was shot by Mugabe henchmen. He was protesting against the murder by the army of David Steven’s a white farmer who refused to give up his farm to a black .

2008 At least 1800 MDC supports are killed during election violence after opposition supporters were targeted hundreds more people die from injuries sustained from military brutality as many as 4,000 died from 3 month of campaigning from violence

2009: Mugabe regime prevents Amnesty International from meeting with families of the Chikurubi Prison massacre 32 family members were shot after a protest outside a courtroom

2010 Hundreds of artisanal diamond miners executed as he takes over the diamond fields.

2012 : 6 Zimbabwean journalists for covering demonstrations are killed by guards in a prison

2013*: The Mugabe regime seizes the passports of high-ranking officials, holding them hostage in Harare -as an attempt to curb defections during election hundreds of cillivans die during violence on campaigning days .

2014 26 students were killed in custody for not singing the national; anthem on the day of Mugabe’s 90th birthday

2016 some 150 people at a Harare church are shot by police to prevent them holding a peaceful protest after Friday prayers. at least 200 more were detained There is no word as to their whereabouts presumed dead

2017 November Mugabe aged 93 is forced to resign ending 37 year reign of terror, with hundreds of thousands killed by state brutality such as police killings, prison killings and targeted killings of groups of citizens as many as 3 million died of starvation and disease under his rule